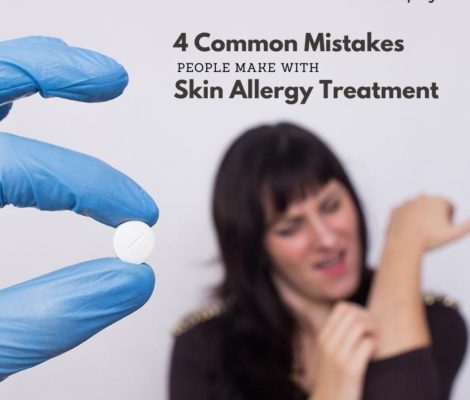 Many people find that their rashes and skin allergies tend to recur after treatment. This may be due to a few common mistakes. Antihistamine tablets are one of the mainstays of treatment for hives (also known as urticaria) and other skin allergies.

They work by reducing the release of a chemical called histamine which causes the itch. 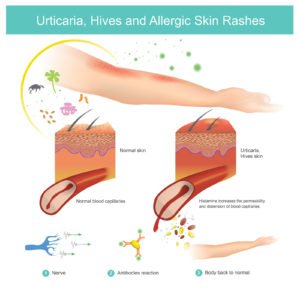 Many people tend to stop the medication after there is some improvement in the rash. This causes a recurrence in the rash, as there is often a second release of histamines by the body even a few days after the initial allergic reaction.

Antihistamines should be taken daily for at least a week, even if the rashes or allergies have resolved.

In particular, for hives, antihistamines are most effective when taken regularly to prevent the onset of hives, rather than only taking them when the hives appear. In some cases, antihistamines may even be required for weeks or months. 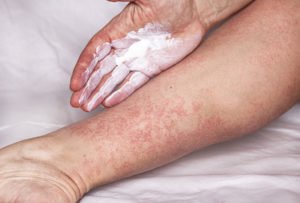 You probably have heard from your doctor that it is important to use a moisturiser on your body daily, but think “Does it really make a difference? Isn’t medication enough?”

Dry skin can cause exacerbations or recurrence of skin allergies. This is due to a weak skin barrier which usually protects the skin by keeping out irritants. Using a moisturiser protects damaged and sensitive skin. When skin is well moisturised, the skin barrier is restored, and potential irritants such as soaps, chemicals, dust, sweat, or clothing fibres are less likely to cause sensitivity.

It is best to use moisturisers right after showers or baths, and more often if the skin feels dry or itchy.

Read More: How to Avoid Dry Skin After Frequent Washing

Antibacterial soaps such as Dettol and Lifebuoy tend to remove the natural oils from the surface of the skin, causing dry skin and affecting the skin barrier. The strong chemicals also cause irritation and sensitivity.

Use a mild, non-fragranced, non-soap skin cleanser if you have skin allergies.

It is also advisable to take short showers with warm water, instead of long hot showers, as prolonged exposure to hot temperature also dries out the skin. Don’t forget to moisturise after the shower!

4. Use of Harsh Soaps like Dettol Overuse of Steroid Creams

While moisturisers are often ignored as part of the daily treatment of skin allergies, steroid creams, on the other hand, tend to be overused.

Steroid creams are potent medication and are to be used only as a thin layer on rashes and ideally not used longer than a week at a time. The steroid cream should also not be used on normal skin.

When overuse, steroid creams may actually thin the skin and cause pigmentation changes. There may also be a rebound of the allergy or rash after stopping the steroid cream if it is used for extended periods. The steroid may also get absorbed and cause systemic bodily side effects – even in unrelated organs – if used in large amounts.

Find a Cure for your Skin Allergy

Have you been suffering from skin allergies? Make an appointment with our doctors for a comprehensive assessment and treatment plan.

What is the Difference between PAP Smear, Thin Prep, and HPV Testing?

ADULTS: What Vaccinations Should I Get?

Recommended vaccinations for adults The COVID-19 vaccination has shone the spotlight on vaccinations and how they are beneficial in reducing complications from certain infectious diseases. […]

What Exactly Is Fatty Liver?

During health screening, some of you may have heard your doctor use the term “fatty liver”. What exactly is fatty liver? In short, it is […]

Should I get the COVID-19 vaccine? I am afraid of the side effects!

Should I get the COVID-19 vaccine? I am afraid of the side effects! That is probably the most in-vogue discussion nowadays. As with any vaccine, […]

Can I take the COVID vaccine if I have face fillers?

Can I take the COVID vaccine if I have face fillers?   Some of you might have read about the three patients with dermal fillers […]

Will COVID-19 affect my pregnancy or baby?

During this COVID-19 pandemic, many couples who are planning for parenthood are worried about the risk of contracting COVID-19 and its possible impact on pregnancy. […]

Will you take the COVID-19 vaccination?

Meatless burgers and milk without cows. Are these healthier options for us in the long term?

Plant-based meats such as Impossible Foods and Beyond Meat are gaining popularity worldwide for their convincing meaty taste as well as eco-sustainability. Many restaurants, including […]

COVID-19 vaccine, how far are we away from one?

In the last 2 weeks, both Pfizer and Moderna announced that their vaccines are respectively 90% and 94.5% effective, and both appear to be safe. […]

Dentists in Singapore and worldwide have reported a rise in teeth grinding or clenching – medically termed bruxism – since the COVID-19 pandemic started...

Is It Really Food Allergy or Something Else?

People who are already faced with restricted diets and limitations on food items that are safe to eat—that is even without the COVID-19 pandemic..

Hypertension, also know known as high blood pressure, refers to the condition in which the blood is pumped around the body at too high..

What is ‘Pinktober’ and The Common Cancers in Women

It’s Pinktober again!     What is Pinktober, or Pink October? October is Breast Cancer Awareness Month, an annual campaign to increase awareness of..

COVID-19 has dominated the healthcare landscape for the past 7-8 months.   Amongst all the attention given to COVID-19, another viral related illness, namely..

Experts Warn of a Possible ‘Twindemic’— Here’s What That Means     “Twindemic” is a new term that refers to the possibility of a..

Covid-19 is Changing Our Beauty Routine

The Covid-19 pandemic is changing the way we’re using products in our beauty routine.   Considering extensive hand washing has become our daily routine,..

Your hair is usually the first thing people notice first about you.     It’s often described as one’s crowning glory.    ..

Boost Your Immune System with These Foods

With effect from 1 July 2020, anyone aged 13 and above who has fever or flu symptoms will have to undergo swab test for COVID-19.   Your..

9 Tips For A Better Sleep At Night

Are you having trouble with sleep now that circuit breaker is over? Some of us may have become used to sleeping late at night..

Work From Home (WFH) and hang out with people virtually has become a new normal.         As we become less..

The COVID-19 pandemic has affected all of us – imposing sudden changes in our lives, causing fears about our health, job and finances, as..

Don’t Forget to Moisturise! How to Avoid Dry Skin After Frequent Washing

Stay home, practise social distancing, and wash your hands—these are some of the measures doctors have advised to help limit the spread of COVID-19...

How to maintain your weight during circuit breaker

Many people have commented that they have put on weight in the past month while staying at home during this circuit breaker, as they..

1. Will my baby be affected if I am diagnosed with COVID-19 infection during pregnancy? As this is a new disease, there is limited..

Stay home this COVID-19 period. Consult our doctors online wherever you are.     Online Consultation with Doctor   From minor illness, chronic conditions,..

Am I protected from COVID-19 because I am still young?

It is well-known that patients who have pre-existing medical conditions, or are older, the mortality rate is much higher.     However, COVID-19 can..

Afraid of visiting your regular Family Physician for fear of catching COVID – 19? Do not fret, online consultation or tele-consultation is now available...

How to Prevent Spread of Covid-19?

There is currently no vaccine to prevent coronavirus disease (COVID-19), and many people are “silent carriers” without any symptoms.     Hence, it is especially […]

The COVID – 19 outbreak is in full swing! Many countries have either closed their borders or imposed quarantine restrictions on travellers from affected..

What Should You Do If You Have Dry Skin?

There are at least five types of skin: normal, dry, oily, combination, and sensitive. Unfortunately, as much as everyone wants to have smooth, clear..

How to Treat Flu and Common Illnesses at Home

Common Illnesses & Home Remedies during CNY     Chinese New Year is a time for gatherings and festival feasting.   Unfortunately, gatherings and..

Our feet support the weight of our body and absorb the force of the hard pavements as we walk. What are some common causes..

Hair Loss is More Common Than You Thought!     We lose around 50 to 100 strands of hair every day and for most..

It’s the time of the year again whereby we globe-trotting Singaporeans take our well-deserved break overseas.   As we travel to increasingly remote and..

Who Should Get the HPV Vaccination? Costs & Types of Vaccine in Singapore

What is HPV? Human Papillomavirus (HPV) is a group of viruses that causes infections in both men and women.   It is estimated that..

Why Do We Get Allergies? Our body is naturally resistant to many viruses and bacteria, thanks to the immune system that detects foreign substances...

Haze in Singapore has reached the unhealthy level recently.   Exposure to the main air pollutant which is particulate matters (PM) may cause irritation..

Vitamin D is produced by our skin upon exposure to sunlight.   Hence, one may think that in sunny Singapore, Vitamin D deficiency would..

Hair loss is a common issue for both men and women.       While there are many types of hair loss, androgenic alopecia..

Guide to use MediSave for Vaccinations | Adult Vaccine Schedule

Those aged 18 and above will be able to use MediSave to pay for recommended vaccinations from Nov 1 with the National Adult Immunisation..

You may have read in the news recently about an infant who developed Cushing’s Syndrome from using a cream containing steroids.   So one..

Dengue season is back!     According to NEA, the number of dengue cases registered in 2019 so far has already exceeded the total..

What is Psoriasis?   Psoriasis often first appears as a red scaly rash with a silvery tinge, and is sometimes mistaken for eczema. It is..

Skin Problems in Babies and Children

Skin Problems in Babies and Children & How to Treat Them Infants and children commonly develop skin rashes, which cause parents much worry.  ..

Feeling itchy?       If it’s your first experience with this condition or you’ve been battling it for a period of time, do..

Many women tend to neglect what is important to them – vaginal health.      Childbirth, hormones, and age can change a woman’s vagina...

The Singapore government has recently announced that girls in Secondary 1 will be able to opt in to receive free Human Papilloma Virus (HPV)..

Take Control Of Your Diabetes

“Tired of repeatedly pricking your finger to check your blood glucose? With the new FreeStyle Libre System from Abbott, there is no need to anymore! In a […]

Vaccinations have been part and parcel of our lives since we were babies. From the day we were born till our pre-teen years, we get […]

Healthsprings was established in 2000 with its first medical clinic located at Bukit Panjang. In 2001, the company ventured into the medical aesthetic field and has been offering Lasers, Peels, Fillers, Botulinum Injections and other aesthetic services. In 2008, Healthsprings Laser and Aesthetic is opened in Orchard Road and has been known to specialise in different aesthetic procedures for the skin, face, body, and hair.

The Sinopharm Vaccines Have Arrived!

What is COVID-19 Antibody Test?

What is COVID-19 Antibody Test?   Also known as Antibody (Serology) test, it conduct samples to look for antibodies to decide if an individual have […]

What queries do you have for Home Recovery Programme (HRP)?

Who is suitable for HR? HR is the standard procedure for fully vaccinated, who are: Persons of aged 12 to 69 No other severe […]