Current in trend is intermittent fasting, which involves fasting for certain hours of the day

or scheduling your meals. 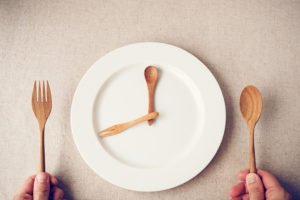 It doesn’t change what you eat but rather, changes when you eat.

Intermittent fasting works by limiting calories during specified hours during the day, which in turn decreasing appetite by slowing the body’s metabolism.

What are the ways to do intermittent diet?

According to the popular Leangains protocol, you fast 16 hours and eat during the 8-hour window. People typically fast throughout the night and skip breakfast in the morning, eating whatever they like from say 12pm to 8pm.

Another popular diet is called 5:2 diet, also known as The Fast Diet. 5:2 refers to five days of the week without eating restrictions, and two other days restrict to 500-600 per day.

Can I drink coffee while fasting?

It’s hard not to reach out your morning coffee when you’re still in your “fasting period”. Black coffee is totally fine – it actually helps to rev up your metabolism.

Coffee with a splash of milk is also acceptable – as long as it’s not a double mocha cappuccino with lots of sprinkles and whipped cream.

Can intermittent fasting help to lose weight and belly fat?

It is said that this regime can help shed pounds faster than other diets. It boosts your metabolic rate which helps to burn more calories (increases calories out) and reduces the amount of food you eat (reduces calories in) which in turn, facilitate weight loss. 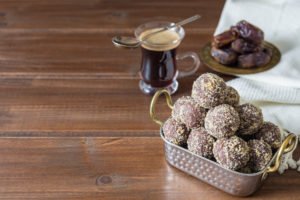 The holy month of Ramadan is the month when many Muslim across the world fast during daylight hours. Those who take part in Ramadan do not eat or drink anything during daylight hours for 29-30 days. Meals are taken typically before dawn (the ‘suhoor’) and after sunset (the ‘iftar’). The end of Ramadan is the festival of breaking of the fast with a special celebratory meal.

How to fast healthily for Ramadan?

Many are curious, is Ramadan fasting good for health? During fasting hours when no food or drink is consumed, most people will experience mild dehydration which can lead to headaches, tiredness, and difficulty concentrating.

However, it is not harmful to health as long as enough fluids are consumed after breaking the fast to replace those lost during the day. The body will rehydrate and regain energy from the foods and drinks consumed. It is suggested to start with plenty of low-fat, fluid-rich foods such as fruit, vegetables and stews – and don’t forget to eat slowly!

Meals after sunset also known as ‘Iftar meals’, are often a time when families and friends come together to break their fasts and celebrate. It is important not to go overboard when eating. Food that is deep fried, creamy, salty, and sweet may actually cause you to gain weight during Ramadan.

Side effects of intermittent fasting?

Apart from the risk of over-eating and being dehydrated, one of the worst side effects of dieting, is that the body tends to burn muscle as well as fat. 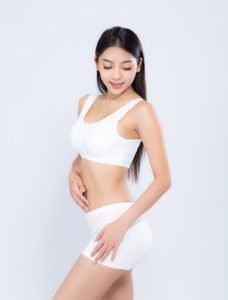 If you’re doing intermittent fasting to lose weight but restricting food intake is not your thing?

There’re many alternative therapies that aid weight loss and reduce fat percentage without surgeries and downtime. You may check out more info on this page.

Mansell, P. I., Fellows, I. W., & Macdonald, I. A. (1990). Enhanced thermogenic response to epinephrine after 48-h starvation in humans. American Journal of Physiology-Regulatory, Integrative and Comparative Physiology, 258(1), R87-R93.

“Tech neck” wrinkles and what can be done to treat them

My face is red after wearing the mask. Do I have rosacea?

Suffering from breakouts under your mask? How to prevent maskne, according to an aesthetic doctor

Review: Finally, a maskne treatment by a doctor that actually works

Maskne? No worries, follow these guides by aesthetic doctor

Maskne: What is it and why it happens?   Maskne ha

Covid-19 is Changing Our Beauty Routine

The Covid-19 pandemic is changing the way we’re u

Your hair is usually the first thing people noti

Is skin pigmentation bothering you?     You m

Work From Home (WFH) and hang out with people vi

Phase 1 of Circuit Breaker is in effect. I am sure many

How to maintain your weight during circuit breaker

Many people have commented that they have put on weight

How young is considered t […]

Good news for the residents in Bidadari/ Woodleigh area

For many, acne, what was once thought of as a mere part

Loose or sagging skin can be frustrating, and it can ha

How to Maintain Weight and Lose Weight After CNY Feasting

The Chinese New Year (CNY) celebration is a time of fea

What aesthetic treatment can I do when pregnant?

During pregnancy, some women are fortunate to ha

Dermal Fillers: What Should You Know About It?

Hair Loss is More Common Than You Thought!

Some people see tattoos as a form of art.

How To Effectively Eliminate Face Fat?

If you are looking to eliminate facial fat, you will ha

Laser-based treatments for pigmentation removal have be

Hair loss is a common issue for both men and women. &nb

6 Things You Need to Know About Laser Pigmentation Removal

In this article, we ask the founder of Healthspr

Dark spots on the skin are usually a result of hyperpig

How to Get Rid of Neck Lines

It’s been said that you can tell a person’s

How to remove tattoo? | Laser Tattoo Removal in Singapore

Have an unwanted tattoo?   Don’t fret

Why you should do a radio frequency (RF) facial?

Wish to tone up your body but too lazy to exercise? We have a tip for you!

Your eyes are nothing but […]

Healthsprings was established in 2000 with its first medical clinic located at Bukit Panjang. In 2001, the company ventured into the medical aesthetic field and has become one of the first Singapore-based clinics to offer Lasers, Peels, Fillers, Botulinum Injections and other aesthetic services. In 2008, Healthsprings Laser and Aesthetic is opened in Orchard Road and has been known to specialise in different aesthetic procedures for the skin, face, body, and hair.

What is Fussy Eating?

My child contracted COVID-19 from her childcare. I have heard about MIS-C. What is it?

Tips on how you can cope with Ramadan Fasting